Bahria Dastarkhwan: Changing Lives, One Meal at a Time

I believe that every human is born with the spirit of philanthropy, acting on which requires a degree of courage. For some of us, this inherent philanthropist is awakened upon observing any charitable opportunity while for others it is an overwhelming urge that causes them to dedicate their lives to a cause. The latter are people worth respecting. The Bahria Dastarkhwan is an initiative that I came across recently and it really struck a chord with me.

“Facility of a free meal for poor and impoverished” was engraved on a large blue board outside the structure of the Bahria Dastarkhwan building. I walked up to the counter and inquired about the manager and was directed towards a uniformed man standing nearby. After a brief introduction, I shared my interest in writing about the Bahria Dastarkhawan initiative. My request was met with approval, and I took in the details.

Bahria Dastarkhawan, a social project by the Bahria Town, is solely committed to feeding the underprivileged segment of society without any discrimination of creed, gender, or race. Bahria Dastarkhwan Lahore is providing free meals and has 12 outlets in Lahore alone. It is operational in many cities across Pakistan, like Multan, Peshawar, and Faisalabad, etc. The Bahria Dastarkhwanis entirely funding by Malik Riaz, Chairman of Bahria Town, and doesn’t seek external aid from any national or international platforms. 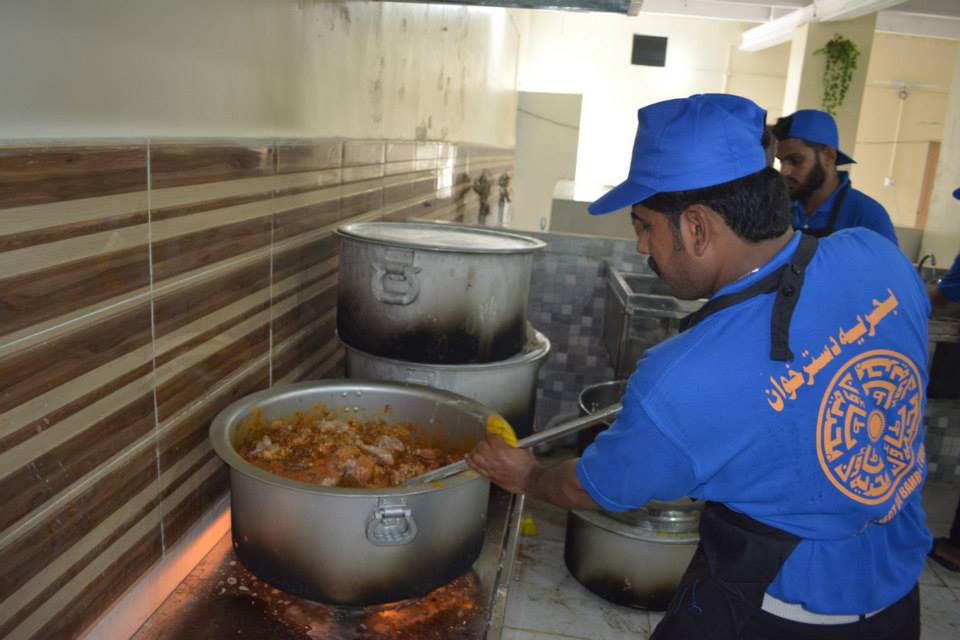 Want more? Check out our other similar posts:

Rizq: The Reluctant Philanthropists
Shehri Pakistan
How To: Lahore After Iftar

The Dastarkhawan provides free meals twice a day; in the morning it operates from 11 am to 2:00 pm, and in the evening it serves from 6:00 pm to 9:00 pm. The menu is set; aloo gosht and daal gosht on weekdays and daal chawal on weekends. The platform feeds entire families and is operational year round, except on Eid.

The magnitude of the initiative is impressive, to say the least. An average of 1400 to 1500 people are being fed on a daily basis, that’s approximately 42 000 people a month. The manager stressed that the quality of food is their utmost priority; any dubious food item fails to gain the approval of the selection authority. Moreover, their cooks are particularly trained and instructed to maintain the highest standards of hygiene.

Explaining the vision of the project he elaborated that Bahria Dastarkhwan wants to provide food while treating every visitor with dignity. Integrity of one is the rudimentary principles for the employees.

It was dinner time when I reached the Dastarkhwan. Several people were busy eating dinner in a large rectangular hall. The air had the pleasant aroma of freshly prepared khameeri roti and daal.

Metallic benches and tables define the interior of the hall. Its walls are adorned with the calligraphic art and verses of meal prayers. The servers wear uniforms, and their heads are covered by hair nets. Roaming from table to table, the staff might as well have been in a professional restaurant the way they were vigilantly catering to the diners.

Organized to perfection and well-equipped with all the amenities including air conditions; it negated my apprehensions of shortcomings that are typical to such ventures.

I left the facility contemplating my contributions in eradicating the misery of human and I couldn’t help praising the endeavours of such philanthropists. The existence of such ventures affirms our belief in the existence of humanity and serves as a beacon of inspiration. At least for me.