The Azadi Interchange offers a dramatic view of the Badshahi Mosque from afar. And as you draw closer, your anticipation heightens; after all, this is the grandiose place you’ve been hearing about for so long. The mosque is the standout feature of a larger complex that comprises of several gardens and smaller monuments. The famed Hazuri Bagh, a marble pavilion built by Raja Ranjit Singh, lends to an unmistakable aura of royalty. The tomb of the celebrated poet Allama Iqbal participates as well, bringing with it a firm grounding in historical patriotism. It feels oddly like peeking through the curtains, right before the split second in which you draw them apart.

Badshahi Mosque is an undisputed signature landmark of Lahore. The writer visited this red-brick compound to see if it lived up to the hype. It did.

The entire edifice is made of red sandstone and the color alone is enough to seduce your eyes. It sits on the landscape, rather out of place, imposing and beckoning. Waiting. Since the time of its construction in 1673, until the Late 20th Century – for 313 years – it reigned as the largest mosque in the world. And it evokes respect in absolute silence.

You gradually take steps towards its broad staircase, making your way to the main entrance. The entrance is like a vision on its own: the first taste of signature Mughal architecture in the form of a mehrab. It engulfs you from all sides.

The initial part of the mosque has two levels. The first level is akin to a small museum; it contains relics belonging to Quaid-e-Azam – the founder of Pakistan – and even (alleged) hair belonging to the Prophet Muhammad (S). At this location the domes of the mosque are invisible on the horizon, a testament to not only the vastness of the mosque but also to the splendor of the entrance itself. The space teases visitors with what it conceals. 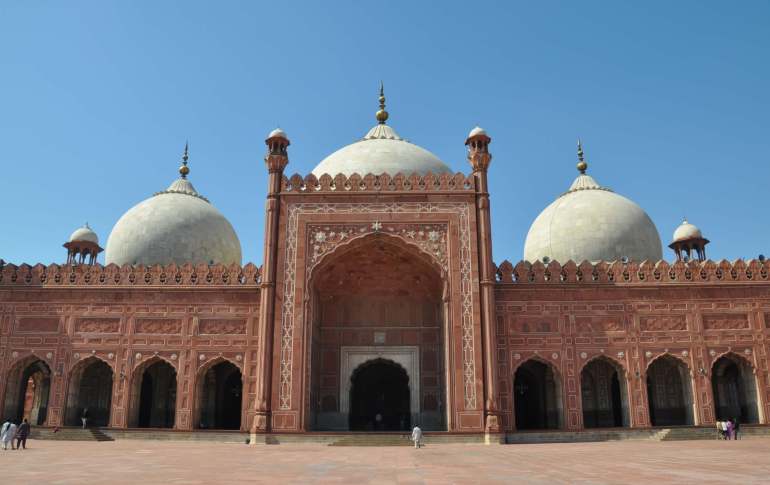 Domes of the Badshahi Mosque 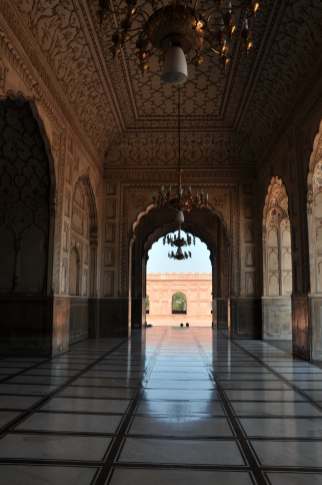 Finally, you get to enter the indomitable Badshahi Mosque. Three domineering domes topped with gold finials demand your undivided attention as four minarets, each with its own marble dome, stand like guards at each corner of the expansive courtyard. A fountain surrounded by a marble pool at the centre acts as a hotspot for posing and photography.

On the eastern, western and southern sides are open corridors for fresh air and picturesque views. They also house designated stations for ablution. These corridors were once chambers for the imam (leader of the prayer) and his family.

Then there’s the prayer hall. Its main archway has two tulip-shaped pillars on either side and you can’t help but pause for a moment to observe them. The interior, though white and relatively plain by Mughal standards at first glance, is a fascinating specimen of architecture. Its beauty lies not in the colors of the floral and geometric patterns but in the intricacy of its design and the thoughtful simplicity of the white marble and gold inlay.

The acoustics of the mosque are carefully thought out, such that one can hear another person speaking in mere whispers on the other side of the wall. Pre-electricity, this architectural design was used regularly so that the call to prayer and the teachings of the imam would resound throughout the mosque.

It’s one thing to visit the Badshahi Mosque; it’s quite another to rediscover its character grounded in historical context. The seemingly too-good-to-be-true Badshahi Mosque lives up to the hype – and then some.

Tags:
A Page out of History, For the Squad, Instaworthy, Kid-Friendly
Share: