On 5th March 2018, a group of the most empowered and empowering women in the circle of social activism in Karachi, during a protest in front of the Karachi Press Club, announced a nationwide “Aurat March” to be held on 8th March in Karachi, Lahore, and Islamabad. This collective referred to themselves as “Hum Aurtein” and became pioneers of a milestone in the progression of activism in Pakistan.

Among the common people, who believe in the cause of feminism but limit their activism to interpersonal interaction or to social media, this was a phenomenon that caught on. People, who wouldn’t otherwise dare to venture out of their houses in this heat, prepared enthusiastically with banners and slogans and attended the entire display at Frere Hall, and then marched along with the front runners. The March was not disruptive, it did not completely block the roads for hours, it did not result in any casualties or any ambulances being kettled.  However, what it did result in was a unanimous and collective uproar that women have been wronged for far too long and are now demanding rights which they have thus far been unfairly denied.

I responded to a call from a friend, asking me to volunteer, and I am grateful that I did. It afforded me the opportunity to witness the process and the organizational efforts involved in pulling off the march. This group of women wasn’t some highly influential niche demographic, they were just people who wanted to change the way this country treats over half of its population. 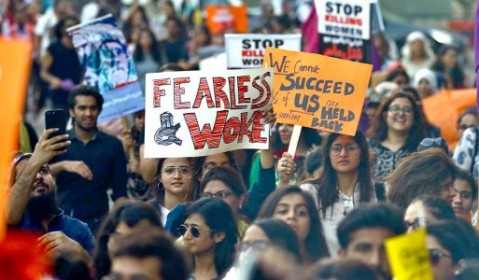 The volunteers were briefed on how to deal with cases of harassment, to walk on the ends of the March, to make sure the flow of traffic continues, to wear a red dupatta to clarify that they are volunteering, and to throw it off immediately and merge into the crowd in a case of an emergency situation. The security provided by any paramilitary force was minimal, so it fell upon the volunteering members of civil society to provide protection and assistance for the March. There were no hidden political agendas or conflicting motives, just a collective societal will to seek change.

Aurat March 2018 did more to shape my perspective on activism than any prior interaction ever had. I was introduced to a multitude of inspirational women. Elitist bourgeoisie women who might not ever even think about walking on a main road in Saddar, women from interior Sindh who probably don’t even get permission to go out in a metropolis, women from areas like Lyari where blood and grief is the most that there is, children who have not yet learned the patriarchal norms and cissexism that infest our society, women from minority communities who are doubly oppressed. Girls in their school uniforms, boys who aim to be put to better use than just being tools of misogyny. People who’d usually never go out of their way to exit their daily bubble, elderly people who had given up on any hope for this society. Victims and survivors, victors and losers of the lottery of birth, activists, and followers. Not a single color missing from the rainbow of pride and the will to do something more. I felt incredibly privileged to stand shoulder to shoulder with these amazing women.

I am indebted to the entire venture that allowed me to mark myself as a comrade of ‘Hum Aurtein’. I am amazed by the collective human ability to transcend affiliations, professions, class, and ethnicity and be a fragment of the bigger picture.