I don’t know how, I don’t know when, but I’ve developed this habit of mentally removing myself from social interactions and then making observations about them. These include, well… everything: experiences in school/college, appearances at weddings, visits to the doctor and/or shopping at hypermarkets. Yeah, I’m a bit much. Lahore’s Army Museum has been one such over-analyzing fest. I should note that there is a personal bias to all-things-Armed-Forces. Got a lot of family in the Army, you see. But then again, I was born a year after my Dad retired, so I’ve never really lived an army life.

Upon entry, the Army Museum is like a hotel lobby. There are large marble desks on either side, with people in sharp black suits that seem to have used far more cologne than necessary. They greet me with large identical smiles and I’m tempted to drop all of the bags I’m carrying in anticipation of a bellboy. 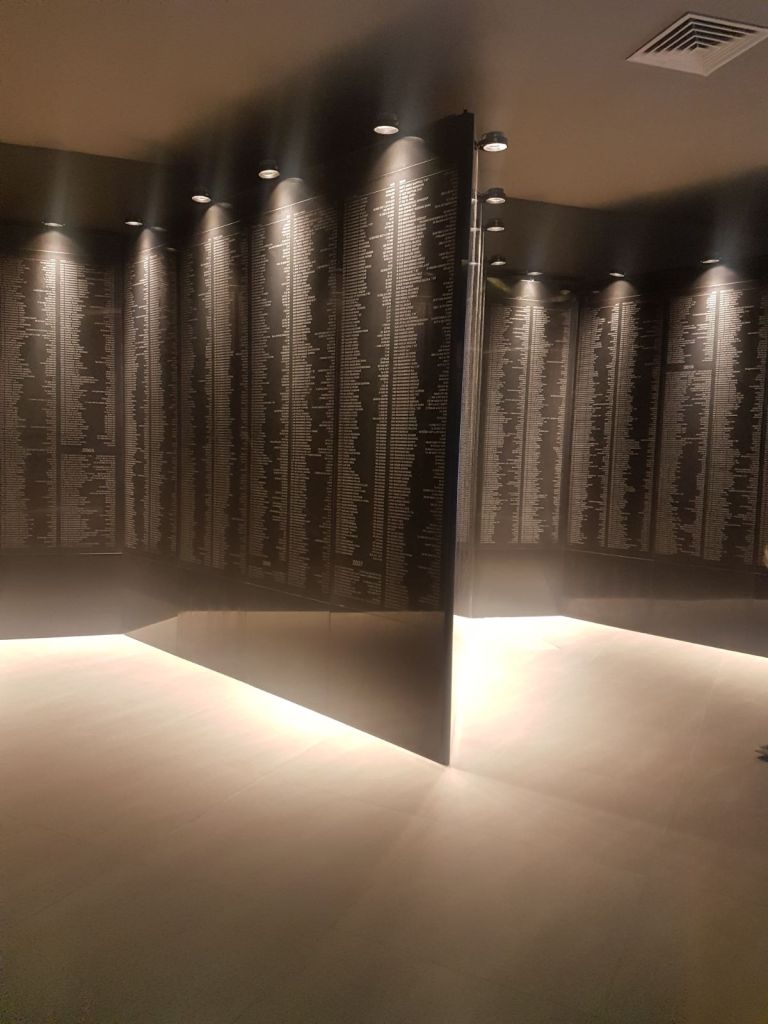 Why so many bags? These overly-cologned men and women voice your thoughts audibly, but before I can explain myself, the reason comes traipsing behind. Our company of thirteen, which has now completely entered the premises of the Army Museum, includes ‘round-about five children. Now I was given the option to either hold a child’s hand or two baby-bags, it was an easy choice.

Before I go forward with this piece, I have some explaining to do about what an ‘Army life’ entails. I’m constantly told by my siblings that it involves a lot of traveling – switching houses with each posting (relocation of Army officers and units after certain periods of time) – and making a lot of new friends.

My parents, however, mention more serious stuff. They talk about adjusting between two and four kids (overtime) on one motorbike along with themselves when moving about. They tell me about living in Astor Valley nearly thirty years ago, with my mother and eldest brother accounting for the only family of an officer in the area, and no one around who spoke the same language as them. At other times, they laugh about being allotted a house with two sprawling gardens, five extra bedrooms that remain unexplored, three baby deer and four kids of their own (an allotment of a different kind). I am told that my Mother constantly made sure that the baby deers and my siblings’ milk-bottles didn’t get mixed up, and that’s just gold.

Down the end of a corridor-like entrance of the Army Museum, two massive elephant tusks beckon the sugar-crazed children towards them. Naturally, we run to catch up with them (catch them). The tusks, it turns out, are attached to a life-sized, clay (or wax, we’ll never know) elephant. It is positioned in combat-mode, ripping through what could only have been a small buggy [carriage]. Two clay/wax (clax?) soldiers are seated on the elephant, both in fatigues that would be considered a modern-day fashion disaster: rags of measly cloth that a safety-pin could destroy. It’s a good thing we’ve come a long way from this attire, and elephants in general (let ‘em live). 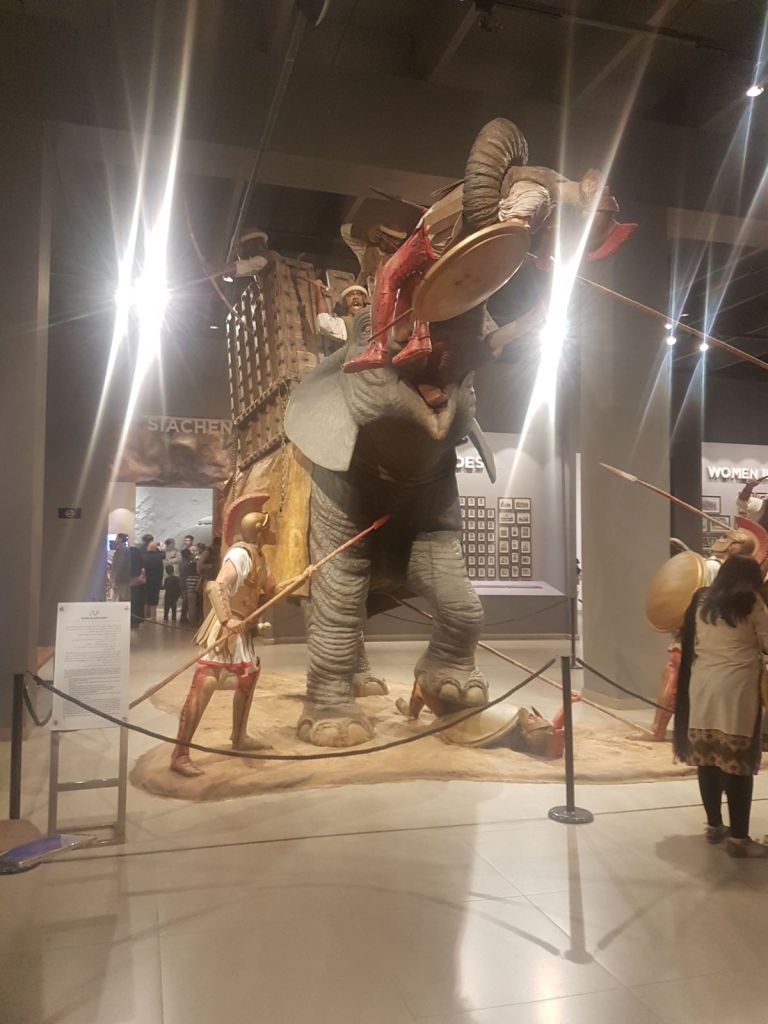 The rest of this hall contains an assortment of displays. It shows how modes of transport and battle have changed overtime, from horses and swords to tanks and guns. The way these exhibits are laid out in the Army Museum makes for an immersive experience. You can walk around them, take a 360 degree view and compare the different forms by looking at them from a distance. Just don’t touch them, okay? Even though there’s nothing stopping you, except a flimsy chain.

This hall acts as an atrium for the Army Museum. There are different exhibits around it: I can see rooms titled “1947”, “Global Peacekeeping”, “Pakistan and Kashmir”, “Fight Against Terrorism” and “White in the Flag” all around. These signs are shadowed-white, placed over small doorways– portals into the world they promise to show. 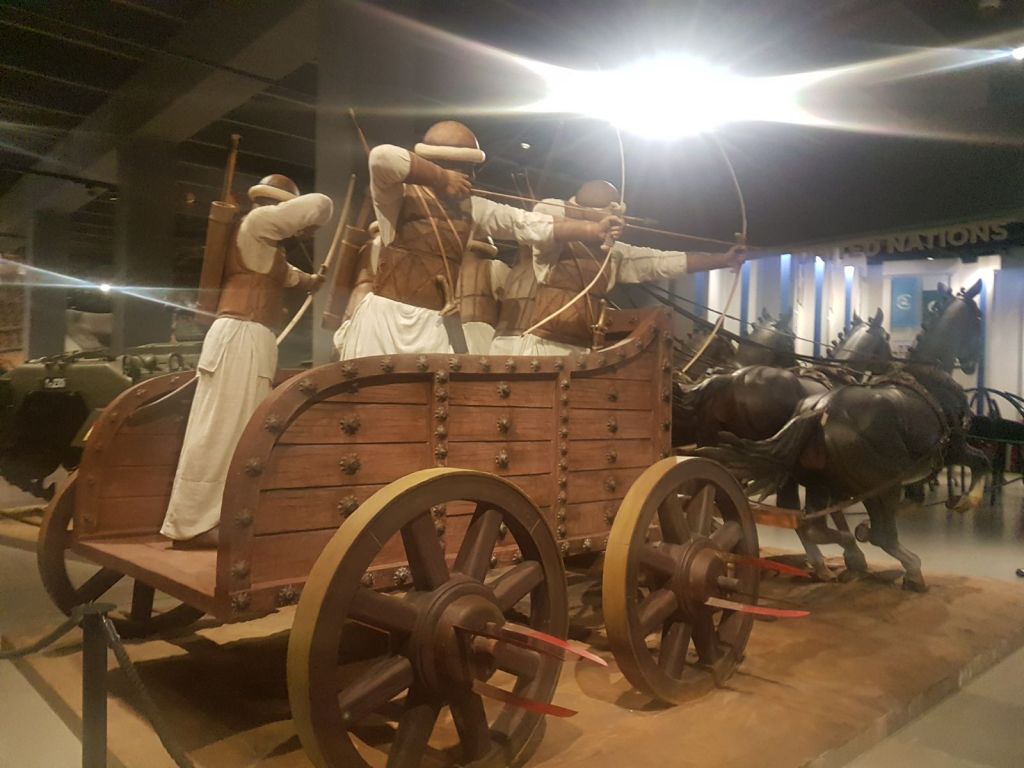 Stories about getting lost in mountainous forest-land, almost-getting frostbite, seeing mirages and hallucinating about mermaids in below-freezing temperature make for thrilling movie plots. And yet, these are actual events that a room full of men in polo shirts and waistcoats narrate to me. I hold onto them, marveling over such nonchalance in the face of all-round bizarreness. I tuck them away in my mind to muse over now and then.

These enclosures are breathtaking. As is the case with museums, you don’t often learn anything new. Instead, a reintroduction of sorts takes place. That’s what the Army Museum consistently does, from one exhibit to the next. 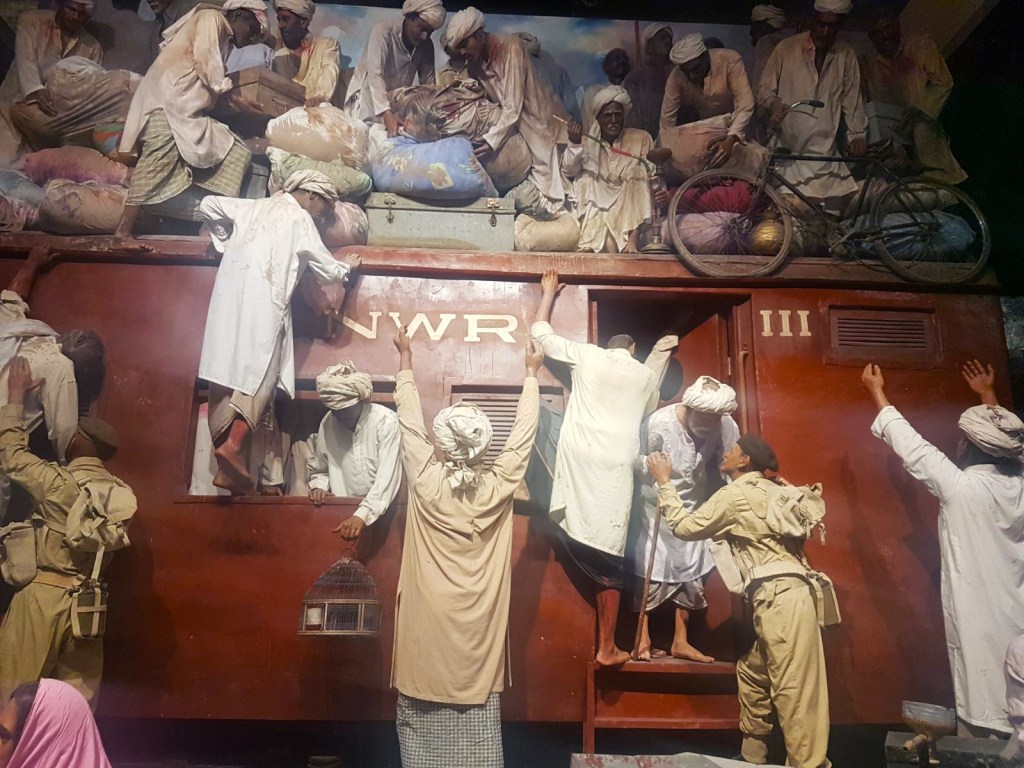 The minute I enter “1947”, the sound of a juggernaut sets the mood: urgency. Front and center, there is a wooden bench. Beyond it is a display of clax figures frantically loading belongings onto a train. People hang out of doors and windows. There’s placards with statistics on the magnitude of this migration. It’s a humbling experience.

There’s a tonal shift in these anecdotes over generations; they now tend to be more in-your-face than those of the generations before me. I haven’t heard as many personalized accounts of the Big Wars (’65, ’71) as I have heard of the contemporary internal security issues of our military. As far as our “historical” battles go, there isn’t much other than the what you read in history books, or see on PTV (Pakistan Television, state-owned terrestrial channel) every few months or so. Maybe this is a generational thing.

There is a stark difference in the way that historical and contemporary sections display subject matter. Sections related to, say, anything before the 2000s have clax figures while exhibits about Kashmir or Peacekeeping rely more on photographs to display the army’s role in these areas. The reason for this, of course, is technical: photographic documentation was a rarity before the 2000s. With newer technology, capturing more things on camera has become possible. 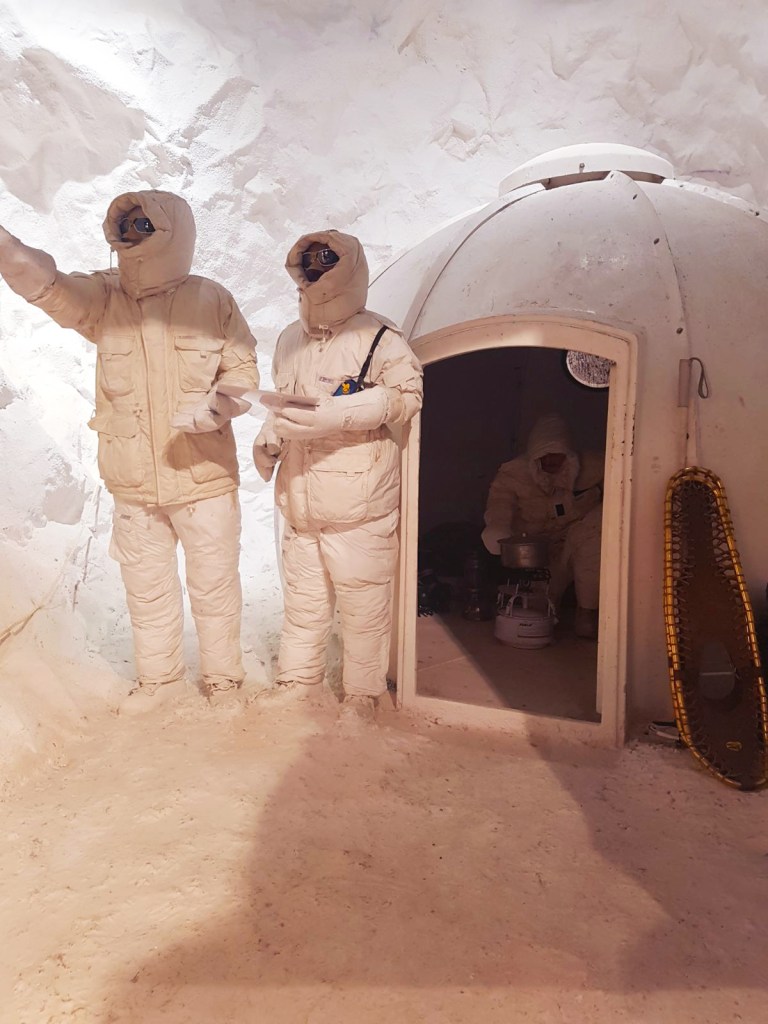 While one may think this takes something away from these exhibits, it doesn’t. Not everything in these historical sections is grounded in visuals. There is a ‘live experience’ of the battle that claimed Major Shaheed (martyred) Raja Aziz Bhatti’s life in the 1965 War with India.

This ‘live experience’ consists of a dark room which accommodates about six people. The door is closed and we are told to hang on tight. Up ahead, I see a figure (Maj. Bhatti) placed on what I can only assume is a hill. He appears to be shooting at a point that is beyond our heads (towards the other side of the room). We can hear his radio conversation. Soon, the enemy starts firing back. Suddenly, the ground begins shaking. It’s a surreal experience: in this moment, I feel exposed. And alone. Oh, so alone. 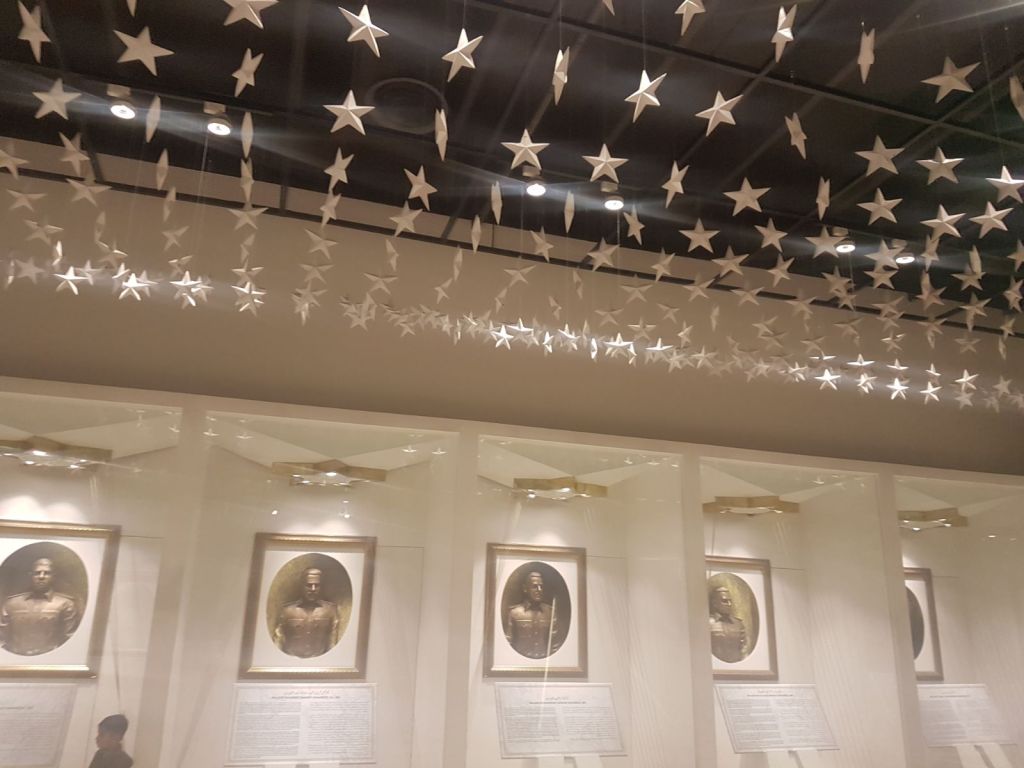 Music from the depths of Pakistan’s patriotic-song-arsenal plays on a loop, in keeping with the exhibit. Someone in my party mutters, “coercion at its best.” And maybe it is. Maybe it is coercive beyond measure. But what are we being coerced into?

There are no exhibits dedicated to Martial Law in Pakistan. You won’t find any placards explaining the policy blunders of 1971 either. Don’t count on an overall picture anytime soon. If you’re up-to-speed on socio-political history, there are glaring holes in the otherwise fact-filled narrative the Army Museum tries to build. 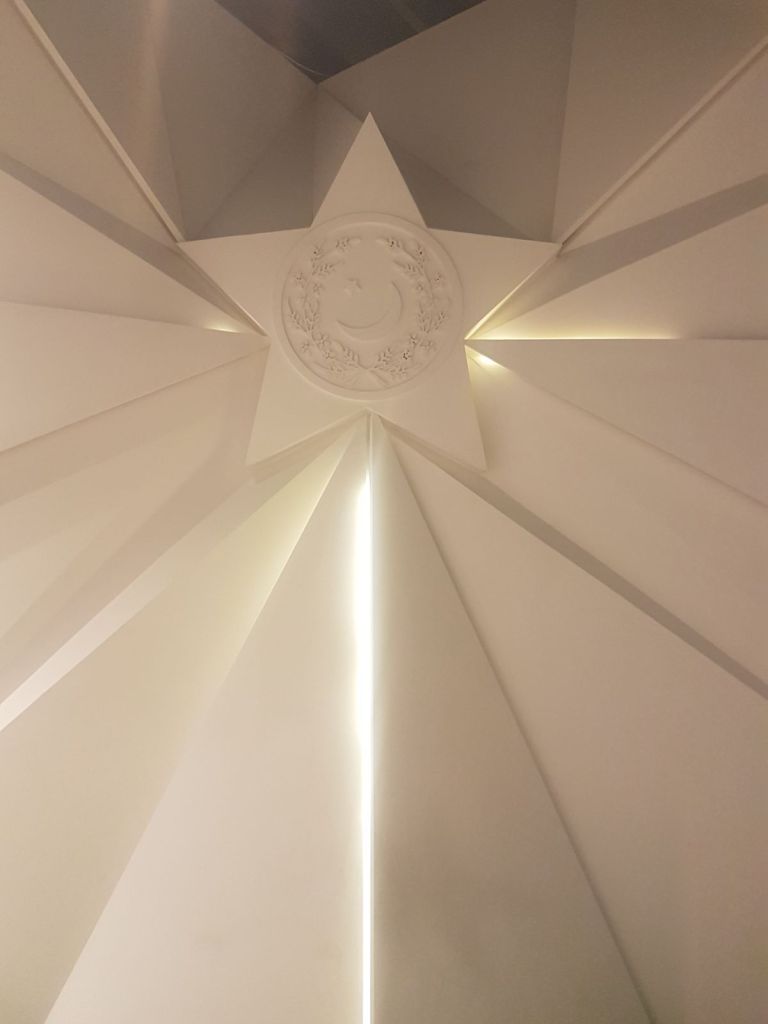 More than anything, though, this museum is an apt depiction of everything the Army Museum does; it represents a key pillar of Pakistani law and order and its incredible machinery. The lighting is spot-on, the ticket costs next to nothing, and the experience is better than words could ever justify.

Tags:
A Page out of History, For the Squad
Share: