Allama Iqbal Town, also named as Iqbal Town, is a residential area in the south-west of Lahore. The town is famous for its commercial locality known as Karim Block. The establishment of the town formally commenced in the late 1970s and early 80s. The area is marked by Wahdat road to the south and Multan road to the north and west. Some of the prominent neighbouring towns include Garden Town, Ichhra, Samanabad, Sabzazar, and Mustafa Town.

Karim Market is a commercial area located on Noor-ul-Amin Road in Karim Block. The market houses factory outlets for garments and shoes, and some of the prominent brands in the market include Minnie Minors, Outfitters, Shirt and Tie Shop, Levi’s, and Royal Tag. Most of the shops, including the brand outlets, offer garments and shoes for women, children, and men at discounted prices. The market looks after the desires of the brand-conscious as well as low-income consumers.

When in Allama Iqbal Town head to Karim Block for designers galore, where street vendors come a dime a dozen. You’ll definitely be needing Google Maps for this one. Our writer found the vicinity dirty. 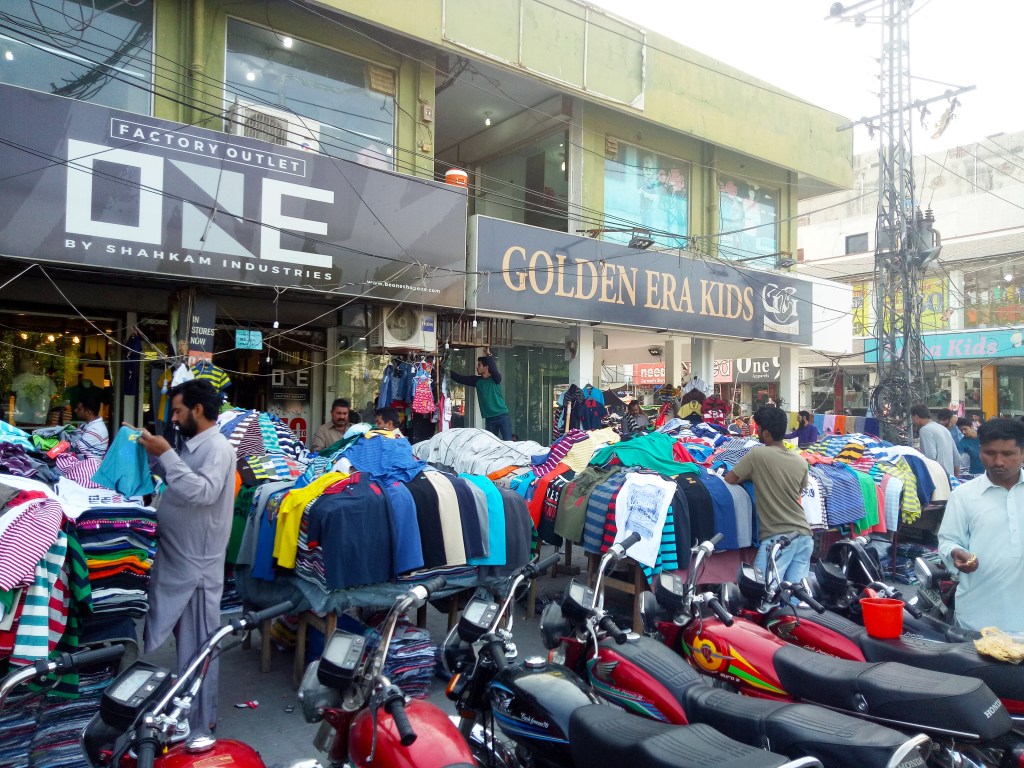 Early in the afternoon, I reached Karim Block with evident pleasure as I have been hearing about it for long. I expected tall buildings like the ones on Main Boulevard Gulberg, for reasons unknown. What I saw was double-storied buildings lying flat along the road. A crowd had gathered outside the shops and around the stacks of blue jeans and colorful t. shirts, arranged on the roadside. 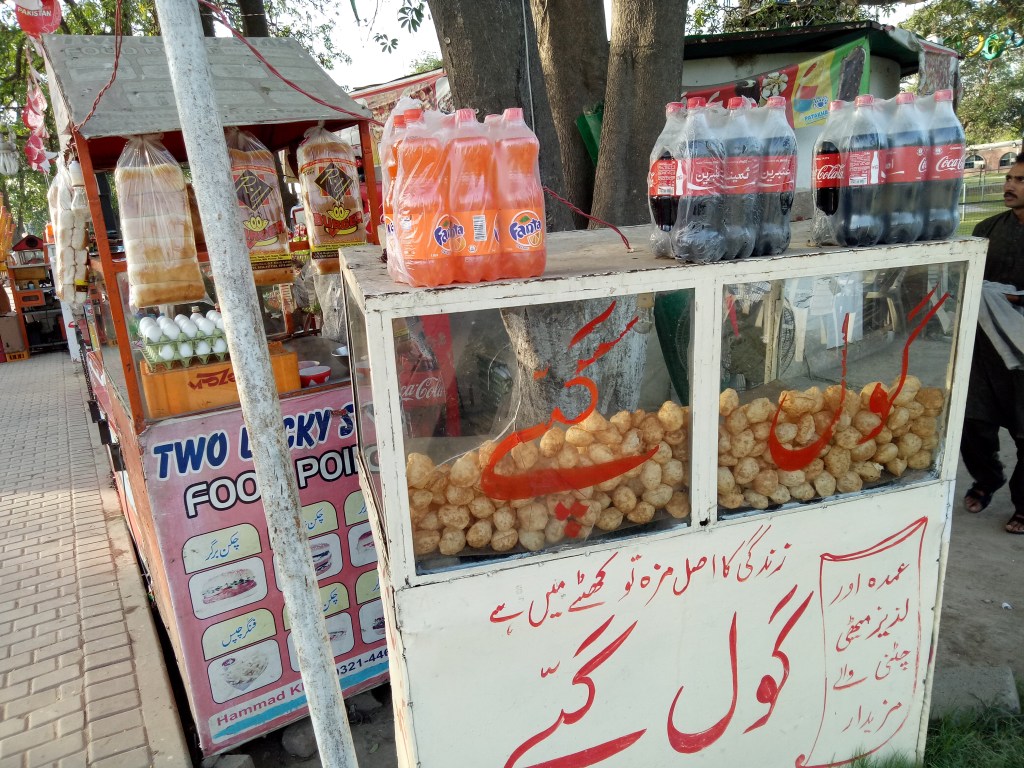 Occasionally, between the garments collections, I witnessed food stalls offering finger chips, fruit shakes, and some other refreshments to tired consumers. I walked around Karim Block and saw people bargaining outside branded shops. Strangely enough, there were Levi’s and Outfitters clothes inside shops, and also outside, with different discounts and prices. I walked further on Noor-ul-Amin Road and found several restaurants including MeatEX, Cook n Nook Pizza, Mr. Sheeda Premium Naan Cuisine, Pizza 21, and one of the locations for the ice cream parlor, Chaman. 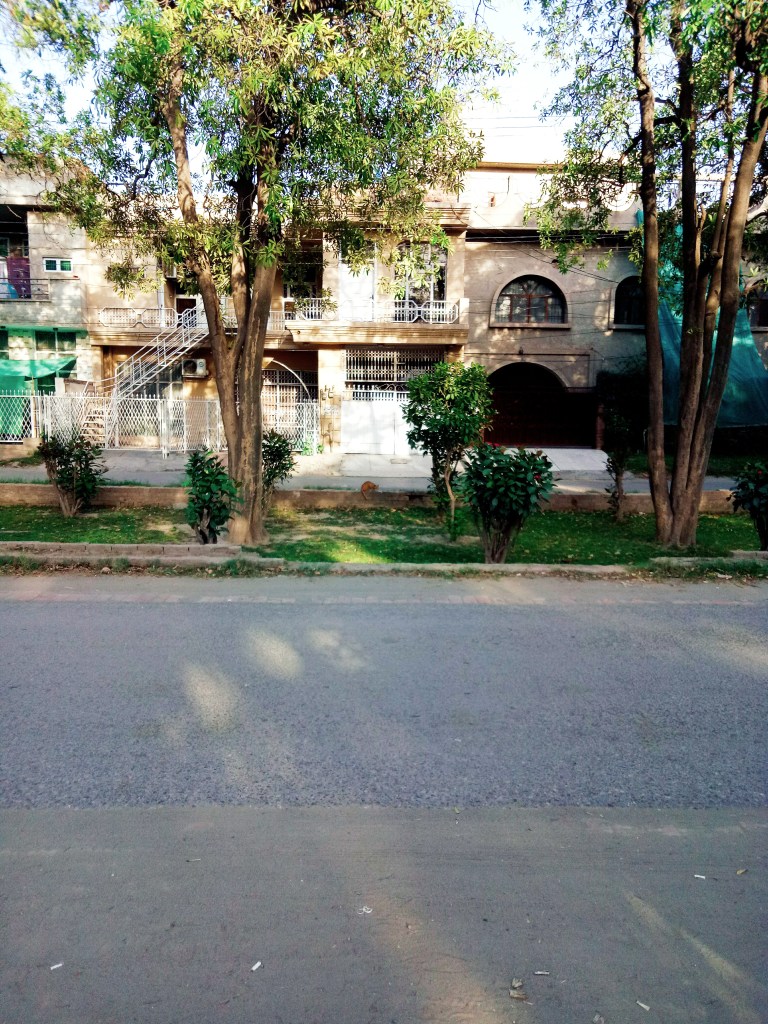 From there, I walked back towards the residential area in Karim Block. There were many finely furnished small and large houses with trees and lawns decorating their forefronts. I enjoyed the peculiar silence of summer afternoons, which was disturbed now and then by some boys talking loud or a vehicle rushing past. Although the streets were not wide enough, they seemed to be planned well.

I walked on the road beside Karim Block Graveyard and peeked through the fence at the marble-covered graves. Close to the front gate, two men were sitting on a charpai with a heap of roses, and their sweet aroma lingered in the surrounding air. Although the gate was open, I did not indulge my uncanny desires and stopped myself from going inside. 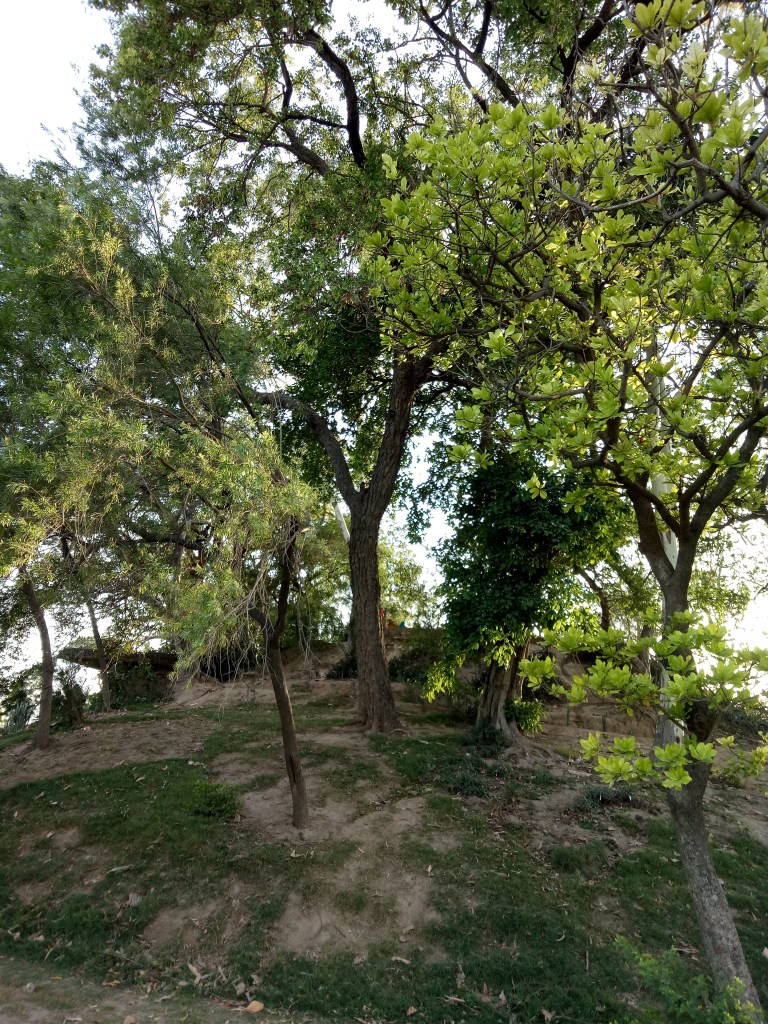 As a child, I used to dream of waking up in graveyards. These dreams were often punctuated by terrified screams. However, there came a time when these dreams stopped frightening me. Now, graveyards fascinate me like football finals. As they do not make me sad, I play this game of mentioning death and graveyards before my frolicking friends in social gatherings. They end up cursing and abusing me with unusual ferocity.

I walked from Karim Block to Kamran Block and decided that I would go all the way to Nishtar Block through Mehran Block. Somehow, I presumed from Google Maps that these four blocks alone constitute the whole of Iqbal Town. Walking in one of the streets, I came across few children playing cricket in front of their houses. The green trees and plants permeated the air with their joyful scents. I could hear the songs of birds in the close-by trees, especially the awkward cawing of crows. 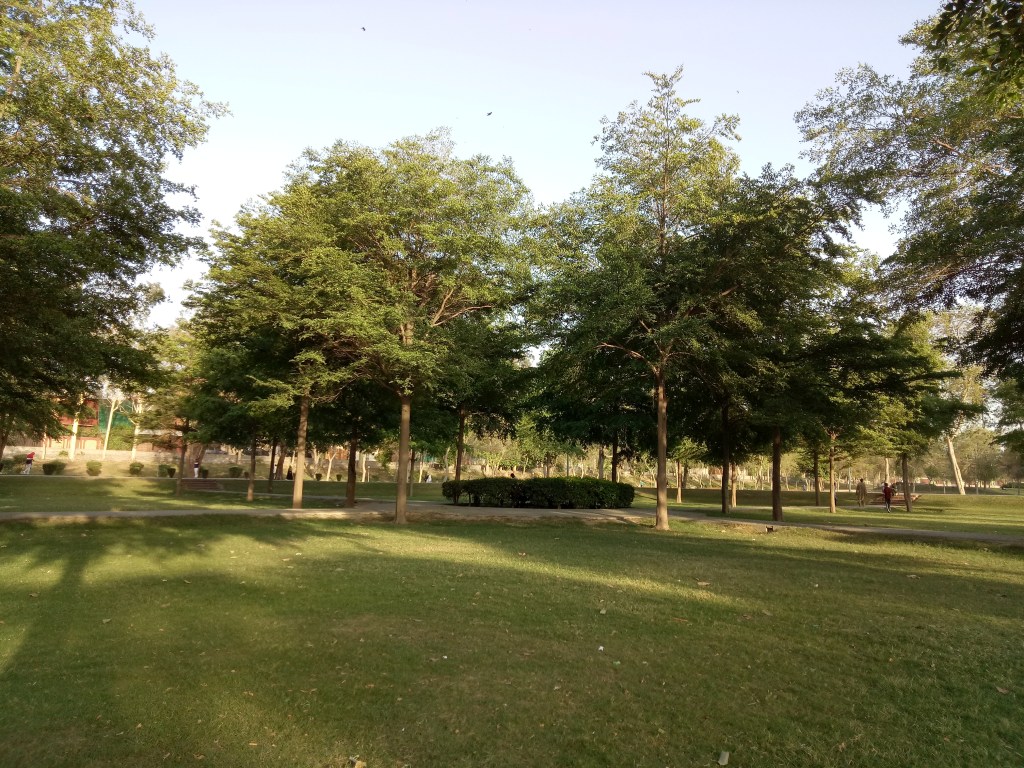 Given the silence and peace, the town not only looked but ‘felt’ like a residential area. As I live in old Lahore, I compared the two towns. Iqbal Town did not exhibit the commotion and population of old Lahore, where even night fails to brings sleep and peace on streets. Compared to Iqbal town, I would say that old Lahore suffers from perennial insomnia like Macondo of Gabriel Garcia.

While sauntering towards Mehran Block, I saw a plot of land with a board that said: do not throw any dirt. Funnily enough, the plot was littered with all kinds of dirt, plastic bags and disposable containers. I assumed that there was no ground or park in Iqbal Town until I reached Dongi Ground. Two young men were pulling – almost carrying – a motorcycle over the stairs to the main road. In the ground, several groups of young people were playing cricket. On the margins, some elderly women sat with their daughters on benches. 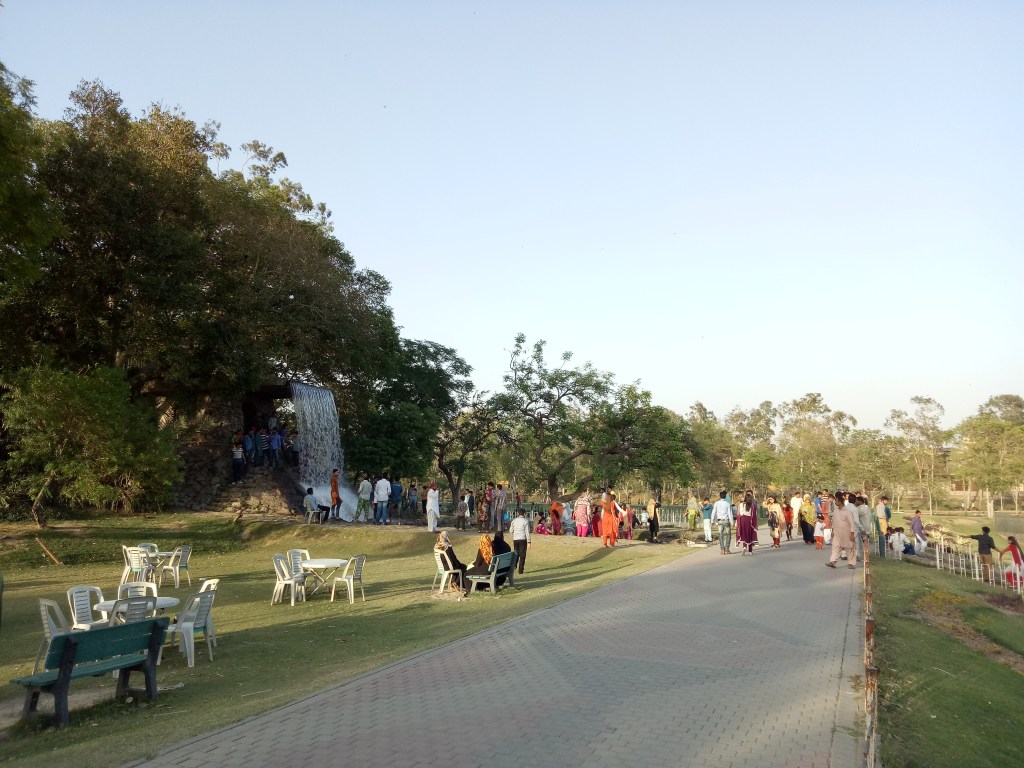 I asked a young man if there is any park or famous place in Iqbal Town. He asked me in return if I had seen Gulshan-e-Iqbal Park. I nodded my head and said that I had not heard of it. Later, I remembered the park in association with the heart-rending blast in 2016, which took many people away. My plan to walk around all the blocks in Iqbal town failed immediately because I had underestimated the expense of the town. I set off straight for Gulshan-e-Iqbal Park from there. Through the gate opposite to Gulshan-e-Haq Road, I entered the park and walked forth on the brick-layered track. 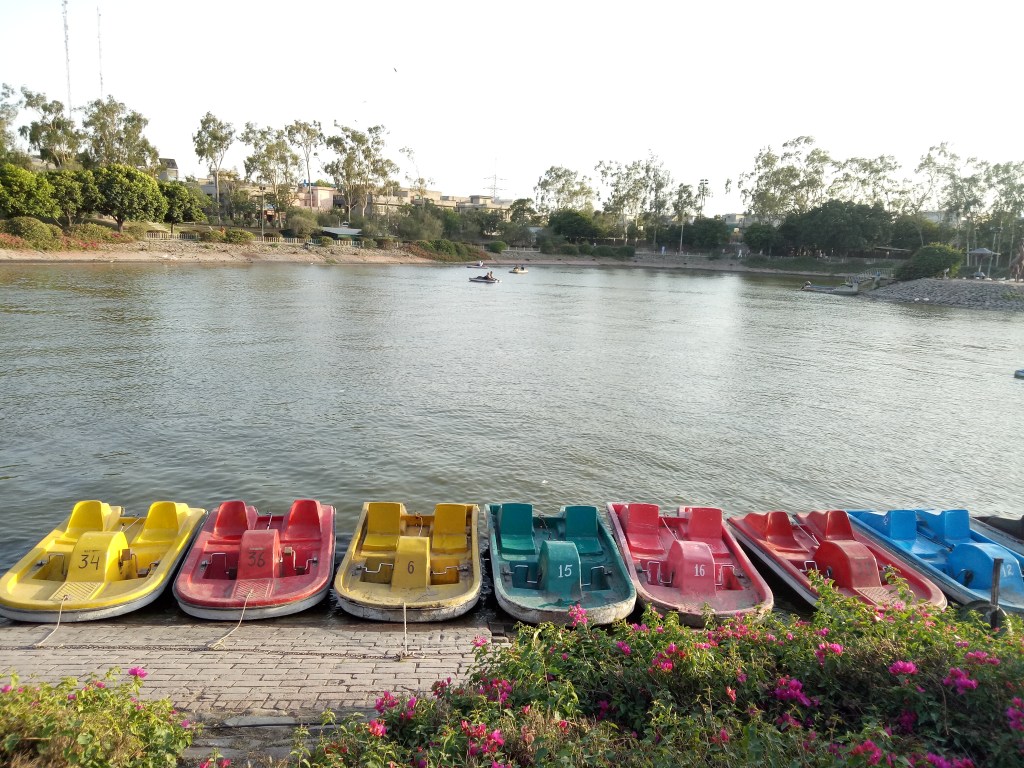 In Iqbal Town, Gulshan-e-Iqbal park has been a site of entertainment and recreation for more than three decades. It was opened to the public in 1982. The park has jogging tracks, lush gardens and grassy grounds, flower beds, an artificial waterfall and a hill. Also, it offers food stalls, enjoyment rides for both adults and children, and a lake, where one can ride paddle and motor boats. 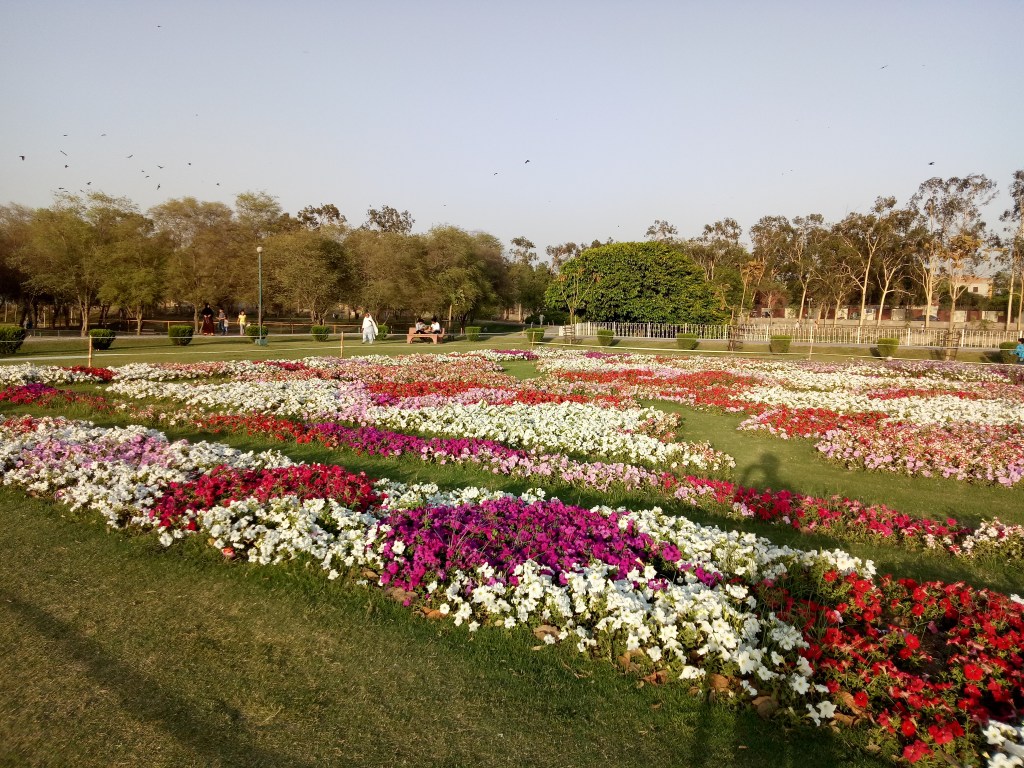 As it was Saturday, they did not allow me in the vicinity of the playground. On Saturdays and Sundays, only families are permitted in these areas. I went towards the lake in the opposite end of the park. On the margins, paddle boats stood buoyed up. Only two couples were paddling their way in the lake in those colorful boats. In the middle of the lake, there was a raised island with a white statue of a camel looking up towards the skies. 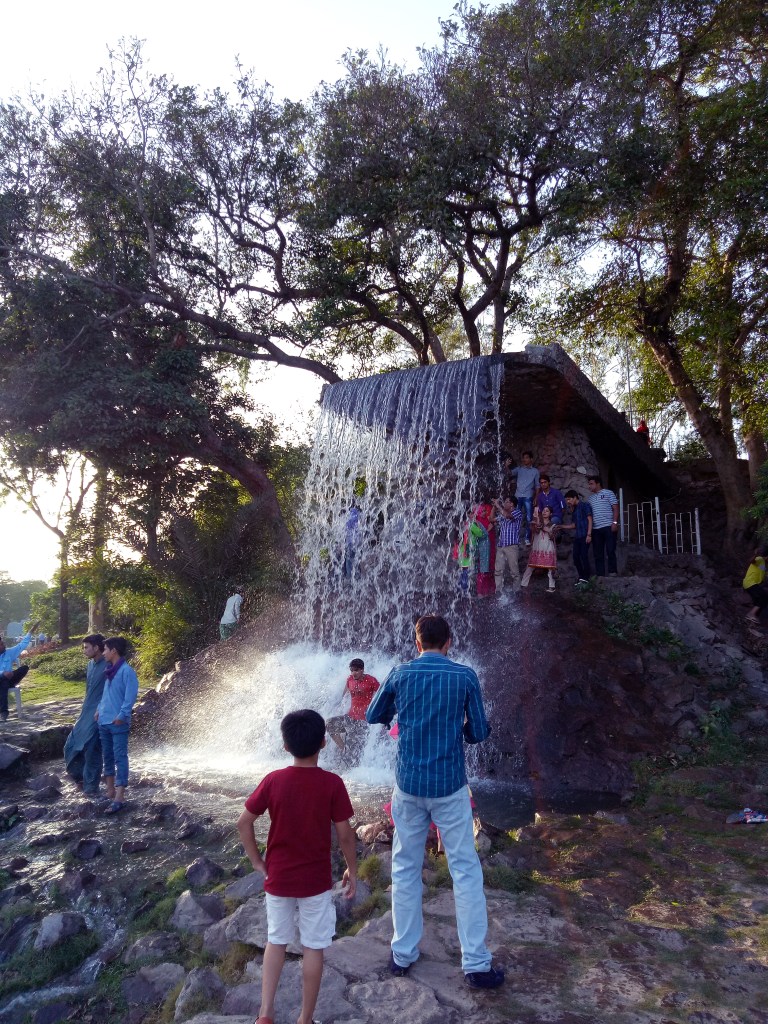 From there, I walked along the grounds with flower beds. The colorful red and blue flowers looked elegant in the afternoon sunlight. Several families had gathered at suitable distances on the grassy grounds with their food containers to celebrate an outdoor picnic. Then, I walked on a footpath up to the point, where people had gathered around the artificial waterfall in the park. A few young children were already enjoying inside the water. Some girls and married women sat on the margins and dipped their legs into the waterfall. Like teabags.

From the waterfall, I went along the artificial hill and reached the main garden around which the jogging track spiraled. Here and there, friends and couples were enjoying the afternoon breeze. As I was tired, I went up to the food stall and ordered myself some refreshments. A couple sitting opposite to me talked in signs and gestures. Few kids kicked a rubber ball around without getting tired. Life, it seemed, went on.